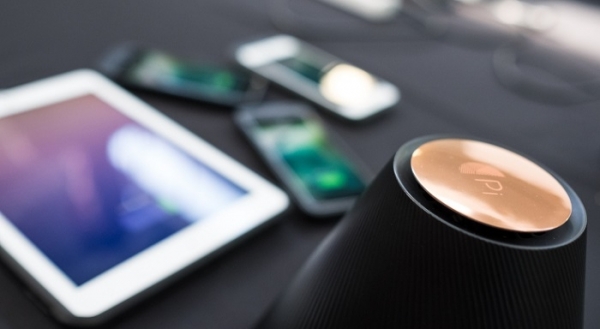 Taking a step ahead into the future, Pi has now unveiled the world’s first wireless, contactless charger. Using never-before-seen electromagnetic charging technology invented by Pi’s team at MIT, it can power multiple smartphones and tablets (iOS or Android) at once, at a distance, without the need of a cord, charging pad, or any contact with a surface. As the only truly contactless charging technology ever harnessed into a safe, affordable, and consumer-friendly device, Pi is ushering in a new era of power.

Despite advances in every part of the mobile experience, charging has not improved beyond an ugly, annoying, ineffective tangle of cords. The most significant update in twenty years is the charging pad. But, not only are charging pads large and unattractive, they prevent the user from using the phone while charging and typically only allow for one device at a time (or require a huge pad) -- its not a great solution. Pi charges smartphones and tablets wirelessly using magnetic fields. Since no contact is required, users can freely move the devices around or use them near the Pi device, without stopping the charging process.

Here is how it works:

Pi, after three and a half years of extensive research and iterations, solved a previously impossible math problem required to reshape magnetic fields in real time, unlocking vast improvements in wireless charging performance. Power is the final frontier in a truly wireless world. And while long range microwave, ultrasound, or laser based technologies have been proposed for wireless charging, none of these technologies have proven safe at power levels needed to charge modern smartphones. Pi’s breakthrough is in finally bringing to market a truly wireless charging technology that is safe and follows existing regulatory standards, while also being affordable, compact and powerful. According to the company, magnetic fields are the best way to send meaningful energy to phones, tablets, and other portable electronics.